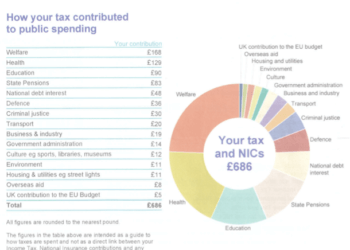 Do you know how the government has spent your money? Do you think the UK government has spent your money in a fair and effective way? These are important questions which we should all know the answers to.
In January, we received a lot of calls from our clients regarding a letter they had received from HMRC. The letter, entitled ‘Your annual Tax Summary 2013-2014’, had one clear purpose: to reveal key areas of tax spending.
Why now? In 2012, Chancellor George Osborne stated that taxpayers would be given a detailed annual breakdown of how the government was spending their money. Two years later and we see 24 million UK taxpayers receiving this letter.

So how much does it cost the government to send a letter to 24 million UK taxpayers? The answer is £5.3 million (£1.7 million in printing costs and £3.6 million for postage and envelopes). It’ s important to note, that no other European country has implemented this initiative. The only developed country to have done something similar is Australia.
Now, let’s look at how your money has been spent by the government. For these purposes, I’ll use a tax summary (2013-2014) sent to one of my clients as an example.

The UK government has done its best to effectively spend the money you contributed in the financial year 2013-2014. Now you understand how your contribution was spent, think sincerely about the way other country’s governments spend their money. Do they want to let the taxpayer know how they spent taxpayers money?
If you have any comments or suggestions, please send me an email: rodolfo.b@verticeservices.com
Please note, the tax summary is for your information only; you don’t need to call HMRC or your employer to check it.