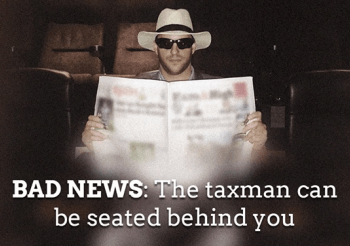 New technology, access to data and extra staff means HMRC can find tax dodgers easier than ever before.
During the week before having to submit our client’s self-assessment returns, I went to the cinema for a short break. As an avid cinemagoer, I took a cab to my favourite cinema VUE O2 in Finchley Road. Realising I had no cash on me, I asked the cab driver to stop at an ATM machine on the way. As soon as I withdrew the cash a message appeared on the screen. See image below.

This HMRC advert is one of many the government has placed in public spaces. This initiative is called “HMRC is closing the net on tax dodgers”. The message is clear: ‘We are coming after you if you don’t pay your taxes’.
As soon as I arrived in the cinema I went to buy myself popcorn and I saw the same HMRC advert on the wall:

When I approached the cinema entrance I saw the picture below:

One of the cinema employees indicated I had to go to Screen 8. As I was walking to Screen 8, I saw the picture below in the corridor

As I watched the film, I found myself thinking more about my clients’ self-assessment tax returns submissions than actually paying much attention to the film itself. It was a very interesting situation because it took me almost an hour to concentrate on the film in front of me.
When the film ended I was on my way out and once more I saw the picture below.

Now, my question is: What is the relationship between “HMRC is closing the net on tax dodgers” initiative and “HMRC sees biggest digital self-assessment ever?”
HMRC believes that all taxpayers have an obligation to pay his/her share of tax contributions.
According to HMRC, if you are dodging paying your taxes and have income you haven’t told them about you need to declare it.
New technology, access to data and extra staff means HMRC can find tax dodgers easier than ever before.
One of the main three undeclared income crackdowns from HMRC in 2015 will be:

The main aim of this article is not to describe each crackdown above but highlight that HMRC has enough details to know if you or your business have offshore accounts; if you are using credit and debit cards to receive payments from your clients and are not declaring it and if you are a residential landlord who is not declaring your property income.
We believe that perhaps you have not declared your income for the reasons below:

You don’t need to get scared. According to my experience, it is better to get in touch with professionals whom you can authorise to deal with HMRC on your behalf. Professionals like the ones you can find in Vertice Services can help you resolve your tax affairs.
Register with us and we can help you prepare your self-assessment tax return and declare the income even if you haven’t paid tax in the last 4 years. We can also help you to pay your tax liability in monthly instalments.
Our main objective is always to help you and make you sleep well at night.
You should also consider other taxes such as:

Now, let’s talk about “HMRC sees biggest digital self-assessment ever?”
HMRC oversaw the biggest ever digital self-assessment event this year, receiving 10.24 million tax returns by midnight on the 31st of January 2015.
A record 85.5 % of these were sent online. Around 4.3 million people (42%) left it until January (the deadline) to send their returns, which HMRC issued in April 2014. Interestingly, people always leave it to the last minute to fulfil their obligations.
Missing the tax return deadline results in an automatic £100 late- filling penalty. There are further late-filling penalties after 3, 6 and 12 months. People with a genuine reason for not filling should contact Vertice Services to ensure they don’t incur more penalties.
The relationship between “HMRC is closing the net on tax dodgers” initiative and “HMRC sees biggest digital self-assessment ever” is the fact that HMRC has been extremely hard and pushy with their campaign to the point perhaps of ‘scaring’ tax payers and are making people aware that you cannot live a life without declaring your income. I am sure that these initiatives which became more exposed from December 2014 to the end of the tax return deadline (31st of January 2015 ) made people think twice and the number of tax returns submitted up to the deadline has been increasing year after year.
If you have any comments about the article above please send me an email Rodolfo.b@verticeservices.com